THIS CLIMATE PLAN MATTERS. EXPECTATIONS ARE HIGH BECAUSE:

We have no more time to lose. Canada has fallen behind in the last ten years of federal inaction on climate while other countries have gotten to work.

Canada is one of the world’s biggest per-capita carbon polluters. We must do our fair share to confront climate change.

Canada is missing out on the the economic opportunities presented by the exponential growth of the global low carbon economy – remaining competitive means getting tough on climate change.

As demonstrated by participation in climate consultations throughout the summer, Canadians are ready to change their habits to reduce pollution. They expect their governments to do the same.

WE EXPECT A PAN-CANADIAN PLAN THAT:

1.  Shows us the megatonnes. A real plan will quantify GHG emissions reductions associated with proposed policies – reductions that reach our current 2030 target of reducing emissions 30% below 2005 levels by 2030 and put Canada on a path to exceeding that target. CAN-Rac recognizes that the current target is incompatible with the Paris Agreement’s long-term goal of limiting global warming to 1.5 degrees C and should be updated as soon as possible[1].

2.  Includes a baked-in accountability mechanism. The credibility of the pan-Canadian plan hinges on its inclusion of a series of tools that reinforce the accountability of theFramework and work to facilitate an increase in Canada’s climate ambition over time beyond our current 2030 target[2].

3.  Articulates ambitious policies in every sector of the economy.

5.  Shows true leadership in areas of strict federal jurisdiction. The federal government has many levers it can use, including leading by example through carbon neutral federal procurement practices. Well designed funding-streams are another critical area of leadership. 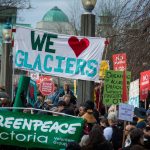